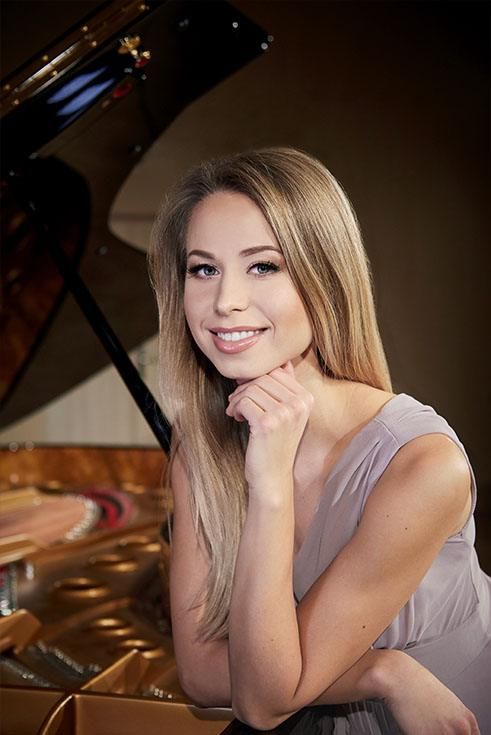 Biography of the pianist

"Her playing was marked by a beautiful sound, control in pedalization and phrasing, a sense of confidence and natural poetic musicality"

Anna Lipiak (born in 1992) is considered as one of the most talented Polish pianists of the young generation. Admired for her poetic musicality, beautiful tone and a sense of freedom on stage. The artist focuses on music of the romantic period, she popularizes Polish music in her projects and promotes the work of women - composers. Her talent was discovered very early, at the age of 5 she was introduced to the piano.

She was a visiting professor, leading piano courses and lectures at the Music Academy in Pune (India, 2019), the National University of Art. George Enescu - Jassy (Romania, 2022), Kathmandu Jazz Conservatory (Nepal, 2018).

In 2018 she graduated from the Music Academy in Bydgoszcz in the class of professor Katarzyna Popowa-Zydron and Jerzy Sulikowski. From 2010-2016 she was studying with Grzegorz Niemczuk, one of the most active polish pianist.

Currently, Lipiak is implementing a project to rediscover and world-wide promote women composers. In 2021 she received a scholarship for artists granted by the Minister of Culture and National Heritage for the project  “The Heritage of Polish Music”, enriching her the repertoire with 44 new works by Polish composers. In 2020, she created a series of 10 lectures on classical music with online concerts.

In 2019 Lipiak achieved a tremendous success with her concert tour, playing 8 recitals in India, receiving great reviews: in The Hindu, The Indian Express, in the Mid-day, etc. In December 2013 she made her debut as a soloist performing 2nd Piano Concerto in F minor op. 21 by F. Chopin, together with the Polish Radio Orchestra directed by Marek Mos in Warsaw. In 2018 Lipiak, as the one of the best graduated, performed Liszt Piano Concerto no.1 in E flat major in the Pomeranian Philharmonic Hall in Bydgoszcz conducted by Michal Dworzynski. In 2015 she performed the piano recital on the 49th Festival of the Polish Pianism in Slupsk. In 2016 she had a concert tour in Italy.

In 2017 Anna Lipiak became a laureate of the prestigious scholarship programme "Young Poland" granted by the Minister of Culture and National Heritage. The same year she was honoured to receive the Student Nobel Prize for the best student of art in Poland. She also received scholarships from: the Marshal of the province Pomerania (2018), Yamaha Music Vietnam (2018), the Minister of Science and Higher Education in Poland(2012, 2013, 2015), President of the Silesian University for outstanding artistic achievements (2012-2015) and Association of Support Talented Youth in Zgorzelec (2006).

This email address is being protected from spambots. You need JavaScript enabled to view it.